Two of my young friends got married last weekend. Their wedding was much-anticipated, a long time in coming. The bride is from a small town in the mountains of North Carolina, and she wanted to get married at home. Luckily for her, "home" is a beautiful family homesite where her father's family has lived for generations.

The weather in North Carolina has been gorgeous lately--sunny and warm, with marvelous blue skies. Last weekend, though, was stormy. We were all hoping that the storms would hold off until after the outdoor wedding. The reception was to be held under the shelter of a massive tent, but the ceremony--the ceremony was to take place in the grand cathedral of the North Carolina mountains, with only the sky overhead.

The storms began rolling in as the guests were gathering. It thundered during the prelude. The clouds intensified during the processional and the scripture reading. And sure enough, it began to rain just after the bride's father had given her away.

The minister was wonderful, getting straight to the point of the ceremony and keeping things sacred but cheerful. The bride and groom were obviously thrilled just to be there. The parents of the groom were poised and peaceful. The mother of the bride was remarkably composed. But it was the father of the bride who took my breath away. He quietly walked up behind the couple and lifted a white umbrella over their heads. 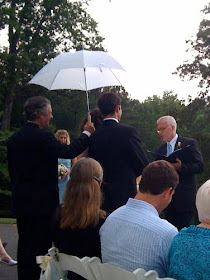 Just after I snapped this photo, umbrellas popped up all around. But in this one precious moment, there was just that one umbrella--the one protecting the bride and groom as they stood before the Lord and pledged their lives to one another. Held by the man who was willing to stand in the rain himself in order to shelter his daughter.

--Unwrapped with Emily at Chatting at the Sky

Thank you so much for taking the time to leave a comment! I read every one; they make my day. If you have a specific question, please be sure your email address is attached to your profile or leave your email address in the comment; I'll get back to you as soon as I can. Every blessing!